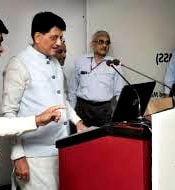 Why there is need of such system?
There are in total 3843 mining leases of major minerals across India, out of which 1710 are working mines and 2133 are non-working mines. Presently, there is absence of robust mechanism of monitoring of illegal mining activity. Current system of monitoring is completely based on local complaints and unconfirmed information which is not transparent and quicker response and action.
How MSS works?