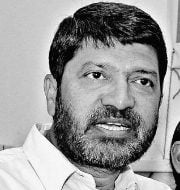 The Union Government has recently constituted 8-member inter-ministerial committee to prepare a blueprint for doubling farmers’ income by 2022.
The committee will be headed by Ashok Dalwai, Additional secretary at the Union Agriculture Ministry and is expected to submit the report in two months.
Its members will include officials from Agriculture and Food Ministries, experts from the Delhi-based National Council of Applied Economic Research and National Institute of Agricultural Economics and Policy Research.
Terms of reference of the Committee