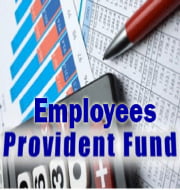 What is Employee Provident Fund (EPF)?
The Employee Provident Fund (EPF) is a retirement benefit applicable only to salaried employees. It is a fund to which both the employee and employer contribute fixed amount (percent) of the former’s basic salary amount each month. This percentage is pre-set by the government. At present, the entire EPF amount is tax free at the time of withdrawal if the employee has completed five years of continuous service.