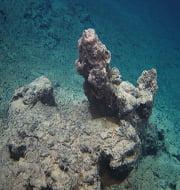 The Union Cabinet has given its approval for signing of 15 years contract for undertaking exploration and other developmental activities related to Poly-Metallic Sulphides (PMS).
The contract was approved between the Union Ministry of Earth Sciences and the International Seabed Authority (ISA).
The exploration and other developmental activities has been allotted in the area of 10,000 sq km in parts of Central and South – West Indian Ridges (SWIR), located in the Indian Ocean.
Benefits of signing contract

This exploration program will be implemented by the Union Ministry of Earth Sciences with the participation from various national institutes and research organisations/ laboratories.

What are Poly-Metallic Sulphides (PMS)?

The International Seabed Authority (ISA) is an intergovernmental body that organizes, regulates and control all mineral (non-living resources) related activities in the international seabed area beyond the limits of national jurisdiction. It functions under the aegis of the United Nations Convention on Law of the Sea (UNCLOS).