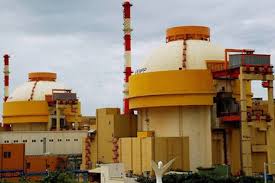 The Union Cabinet has cleared a proposal allowing for the construction of 10 indigenous Pressurised Heavy Water Reactors (PHWR). The reactors will have a capacity of 700 MW. These reactors will add 7000 MW capacity and will ramp up nuclear power generation in the country.

Pressurised Heavy Water Reactors use natural uranium as fuel and heavy water as both moderator and coolant. India’s first PHWR was constructed at Rawatbhata in Rajasthan in technical cooperation with the Atomic Energy Canada Ltd (AECL). However, the Canada’s support was immediately withdrawn after India’s first nuclear experiment at Pokhran in 1974. India’s first nuclear power plant with a different design was built at Tarapur in Maharashtra. PHWR units are in operation in Rawatbhata, Kaiga, Kakrapar, Kalpakkam and Narora. Recently, it was announced that the Nuclear Power Corporation of India Limited (NPCIL) is ready to sell Pressurised Heavy Water Reactors of 220 MWe or 540 MWe capacity to other countries.