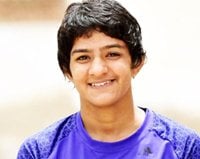 India’s Ritu Phogat has won Silver medal in Under-23 Senior World Wrestling held in Poland. She won silver medal in 48 kg category.
She entered into final by defeating Bulgarian Wrestler Selishka in Quarter finals and Chinese Wrestler Jiang Zhu in the semi-final. In the gold medal bout (in the final match), she lost against Turkish Wrestler Evin Demirhan and stand in second with a silver medal.
Another young Indian wrestler, Divya Kakran, came close to a medal but lost in the bronze medal bout.

Ritu Phogat is an Indian female wrestler from the state of Haryana. She is one the three Phogat sisters from Haryana. Her sisters Geeta Phogat and Babita Kumari, as well as cousin Vinesh Phogat, have established themselves as world-class wrestlers.
Previously, Ritu Phogat won gold medal at the Commonwealth Wrestling in Singapore in the 48 kg category, bronze medal at the Asian Championships. She also won National championship, which was held Indore.
She became the most expensive female wrestler at the Pro Wrestling League auction in 2016 and played for Jaipur Ninjas franchise.

About Under-23 Senior World Wrestling