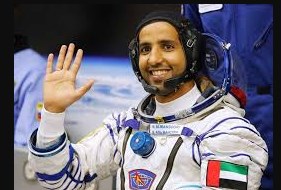 The United Arab Emirates’s (UAE) Hazza Al Mansouri became the first Emirati and the first Arab astronaut to travel to International Space Station (ISS). However he is only the 3rd Arab in space after Sultan Bin Salman Bin Abdul Aziz of Saudi Arabia (1985), and Mohammad Faris (1987) of Syria.

He blasted into space accompanied by Oleg Skripochka of Russia and NASA astronaut Jessica Meir onboard a Soyuz MS-15 rocket from Baikonur in Kazakhstan.

The 35-year-old is a former pilot in the UAE armed forces. He will be the first Emirati astronaut and first Arab on orbiting laboratory of ISS, but not the first Muslim.

He will spend 8 days at International Space Station (ISS) doing scientific experiments with other international astronauts.

The Mohammed Bin Rashid Space Center provided Al Mansoori with a 10kg bag, which includes important elements of Emirati heritage, culture and history, which will be placed in museums upon his return.

As part of UAE’s space plans, the Arab nation has announced its aim to also become the first Arab country to send an unmanned probe to orbit Mars by 2021.  The country has named its Mars mission as “Hope”.

In the long-term, UAE also plans to build a “Science City” to replicate life on Mars. It also aims to create the first human settlement on red planet by 2117.