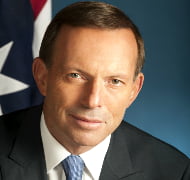 Australian Prime Minister Tony Abbott was ousted from power as leader of the ruling centre-right Liberal Party by challenger Malcolm Turnbull.
In an internal party leadership ballot, Abbott received 44 votes while Turnbull received 54 votes. Prior to challenging the leadership of Tony Abbott, Turnbull had resigned from the cabinet.
He had blamed the Prime Minister Tony Abbott was incapable of providing the economic leadership the country needs.
Malcolm Turnbull is expected to be sworn in as new Prime Minister of Australia after Abbott writes to the Governor General and resigns. He will become the 29th Prime Minister of the country.
Turnbull will be Australia’s fourth PM since 2013. Labor Party PM Julia Gillard was ousted by rival Kevin Rudd in a leadership vote in 2013. Later Tony Abbott became PM after Liberal Party and its coalition partners the National Party won in general election in September 2013.
Under the Australian parliamentary system similar to Indian system, Prime Minister is not directly elected by voters but he is the leader of the party or coalition that can command a majority in parliament.