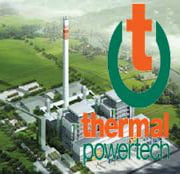 Thermal Powertech Corporation India Ltd (TPCIL) has synchronised the second 660 MW unit of its 1,320 MW coal-fired thermal power plant with the grid on 11 August.
The power plant is situated at Krishnapatnam in Nellore district of Andhra Pradesh, whose first unit of 660 MW was synchronised in 2014 and started commercial operations from February 2015.
The commercial operation of second unit is expected to commence by September 2015 with which it will function in full capacity of 1,320 MW.
The thermal power plant is developed and operated by TPCIL which was incorporated in 2008 as a joint venture company between Hyderabad-based Gayatri Energy Ventures Private Limited and Singapore-based SembCorp Utilities.
The Singapore-based Sembcorp Industries has gross power capacity of over 8,200 MW and has over 3,340 MW of capacity in India of which 2,640 MW is of thermal energy and 700 MW in from renewable energy.
Fuel Source: The JV has fuel supply agreements with Mahanadi Coal Fields and Indonesia-based PT Bayan Resources for the supply of coal for its super-critical coal-fired power plant.