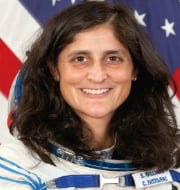 They will be trained and prepared for commercial space flights of Boeing Company and SpaceX to provide low-Earth orbit transportation services to and from the International Space Station (ISS).
Thus it will open up low-Earth orbit transportation to the private sector and help US be once again self-reliant in space travel, as they are currently dependent on Russia.
They will also be part of NASA’s ambitious plan of human landing on Mars by 2030.

NASA had chosen Williams for the astronaut programme in 1998. Prior to this she was a US Navy captain and was a helicopter pilot with more than 3,000 flight hours experience in more than 30 different aircraft.
Presently, she ranks 6th on the all-time US endurance list and 2nd all-time for a female astronaut. She holds the world records for most spacewalk time by a woman astronaut (50 hours, 40 minutes) and most spacewalks by a woman astronaut (seven times).