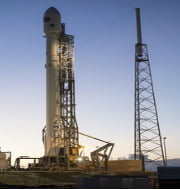 National Aeronautics and Space Administration (NASA) has successfully launched the SpaceX Falcon 9 rocket carrying Jason-3 Ocean-monitoring satellite.
It was launched from California’s Vandenberg Air Force Base and the satellite has been successfully inserted it in the desired orbit. Jason-3 is the 4th mission in the joint US-European series of satellite missions that measure the height of the ocean surface.
Key facts

Earlier launched two satellites of Jason mission are Jason-1 and Jason-2 OSTM which were launched in 2001 and 2008 respectively.