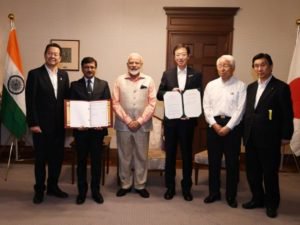 A Letter of Intent (LoI) was exchanged between Ahmedabad and Japanese city of Kobe for a sister city partnership. The LoI was exchanged in presence of Indian Prime Minister Narendra Modi, who visited Kobe to address a large Indian diaspora event.

Authorities from Japanese city of Kobe exchanged Letter of Intent (LoI) with their counterparts in Ahmedabad for Ahmedabad-Kobe Sister City Partnership.

This development will further pave the way for an enhanced economic relationship as well as a cultural exchange between two vibrant cities as well as between India and Japan.

In November 2016, PM Narendra Modi and his Japanese counterpart Shinzo Abe inked a sister-state relationship Memorandum of Understanding for Gujarat and Hyogo prefecture, a Japanese prefecture in Kansai region of Japan’s main island, Honshu. Kobe is capital city of Hyogo. During his visit, Modi had also visited a bullet train plant in Kobe.

MoU then signed was sought to promote mutual cooperation between Gujarat and Hyogo in fields of academics, cultural cooperation, business, environmental protection and disaster management.

What is a sister city?

This plan was conceived after World War II ended so as to promote peaceful coexistence and to encourage trade and tourism.

In diplomacy, the concept of sister cities is seen as a way for enhancing strategic ties between two nations, both cultural and economic.

In India there is no such part where Japan’s projects or investments have not left its mark in similar manner, talent and manpower of India are also contributing towards strengthening Japan. This partnership has risen from a time when both countries collaborated in building cars and are collaborating in building a bullet train.

India is also planning to run its 1st bullet train between Mumbai and Ahmedabad with the help of Japan. The first stretch of ambitious project is expected to be completed by 2022.