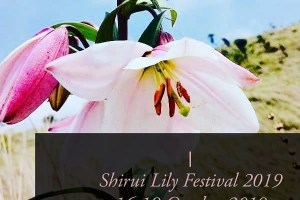 The northeastern state of Manipur is hosting the 3rd state level Shirui Lily Festival, 2019 from 16-19 October. The festival was inaugurated by Union Minister of State (Independent Charge) for Tourism and Culture Prahlad Singh Patel at Shirui Vangayan Ground of Ukhrul in Manipur. Minster Patel along with State Chief Minister N. Biren Singh inaugurated the Strength of Unity Statue as a mark of opening 3rd edition of four-day state festival.

The annual festival is hosted by state Department of Tourism in Ukhrul district. The event features demonstrations of age-old traditions and culture of inhabitants of district of Ukhrul. The festival is organized during this time keeping in mind the peak blooming season of flower.

Festival seeks to spread the awareness about the endangered Shirui Lily and promote the district of Ukhrul as a tourist destination in Manipur.

Scottish rock band Nazareth and American rock band Extreme will be performing on at the festival. This is Extreme’s debut performance in the country and Nazareth’s second performance in India, as the band had previously performed in Mizoram back in 2017.

The lilies of Shirui: The lilies, here in Shirui (about 3 hours from Imphal), play a significant role in festival. The rare, pink-white flower is only found in this area. The lilies are also known as Siroy Lily, or Lilium Macklinae, named after Jean Macklin, who supposedly spotted these flowers in 1946. The Shirui Lily has also been awarded at Royal Horticultural Society’s Flower Show in London in 1948.

Significance: Manipur Tourism recognizes importance of Shirui Lily as State Flower of Manipur and event is a part of its efforts to develop and implement sustainable and responsible tourism State. Such cultural events also reflect beauty and treasure of North Eastern culture. The joint efforts of State Government and Central Government can only promote tourism and culture of a region to level of people’s expectation.

It is the highest hill station of Manipur and is located at a distance of about 83km to east of Imphal, Manipur capital. The district is inhabited by tribes namely- the Angamis, the Kukis and Tangkhul Nagas (the colorful warrior tribe and one of the oldest major tribes of Manipur).