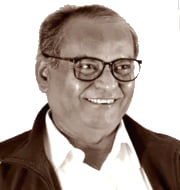 Senior journalist and scholar Aroon Tikekar passed away in Mumbai, Maharashtra. He was 72.
He was associated with different various newspaper groups and has authored over 20 books.