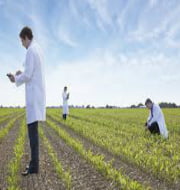 Now the future challenge is to re-engineer the code of other lifeforms.