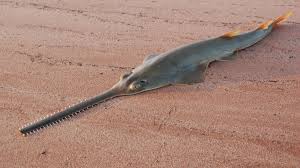 Scientists on World Sawfish Day (observed on October 17th) announced that sawfish, sighted off Indian coast less than 10 times in over a decade appears to be more threatened than tigers and elephants
Anecdotal evidence suggested that sawfish was once common along the Indian coast but today it may be the most endangered fish species in India.

Sawfish also known as carpenter sharks are a family of rays. They are characterized by long, narrow, flattened rostrum or nose extension, lined with sharp transverse teeth resembling saw.Sawfish are closely related to sharks and have shark-shaped bodies, hence, they are also called flat sharks.
They are elasmobranchs meaning their skeleton is made of cartilage. There are only five species of sawfish ever identified —knifetooth sawfish, smalltooth sawfish, dwarf sawfish largetooth sawfish and green sawfish.
Protection Status: In the International Union for Conservation of Nature Global Red List, sawfish family has been assessed either ‘Endangered’ or ‘Critically Endangered’ considering their threatened status, high extinction risk and observed population decline. The sawfish has been given high degree of protection as it is listed in Schedule I of the Indian Wildlife (Protection) Act 1972 enacted to save them from exploitation.