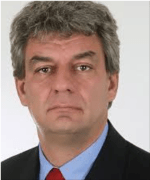 In Romania, President Klaus Iohannis has appointed outgoing economy minister Mihai Tudose as Prime Minister and thus paved the way for the formation of a new leftist Social-Democrat-led government in that country. According to the President of Romania, the decision has been taken keeping in mind the political crisis that risked damaging the country’s record economic recovery.
The ruling Social Democrat Party (PSD) was ousted from the power following an internal power struggle. PSD filed a no-confidence motion against ex-Prime Minister Sorin Grindeanu for causing delays in implementing reforms. Grindeanu has been ousted from power barely six months after PSD swept back to victory in elections.
The Prime Minister-designate Mihai Tudose will have 10 days to gain the vote of confidence.

Romania is the second poorest country of the European Union. It is the largest of the Balkan countries and has a coastline on the Black Sea. Romania was under the rule of the Roman, Ottoman and the Austro-Hungarian Empires. In the 2004 Romania got admitted into NATO and in 2007 it joined the European Union (EU).