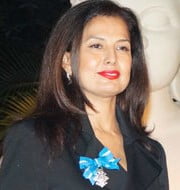 Noted fashion designer Ritu Beri has been appointed advisor to the Khadi and Village Industries Commission (KVIC) for promotion of khadi in India and across the world.
She has been appointed for tenure of one year and shall advise KVIC on ways to promote khadi in India and across the world.
Beri has 25 years of rich experience in the global fashion arena designing clothes for international and national celebrities.