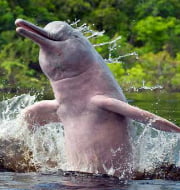 The Forest Department of the Odisha State Government conducted a census at Chilika lake to count the number of dolphins at Gahirmatha Marine Sanctuary in Odisha. The Sanctuary is a part of Bhitarkanika National Park of Odisha. The report was released in February 24, 2020.

The Dolphin Census at the Garimatha Marine Sanctuary was held for the first time in 2015. It was cancelled in 2016 and 2017 due to bad weather.

Chilika Lake and the dolphins

Chilika lake is a Ramsar Site. This year as the prawn Gherries were dismantled, the dolphins were spread all over the lake. Dolphins are listed in Schedule I of Indian Wildlife (Protection) act 1972. The IUCN red list categorizes Dolphins as Endangered.