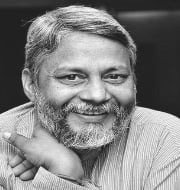 Renowned water conservationist and environment activist Rajendra Singh has been conferred with 2015 Stockholm Water Prize.
He was awarded this prize for his innovative water restoration efforts and consistent attempts to improve the water security in villages in India.

Rajendra Singh is fourth Indian to win the prestigious global award. Others are