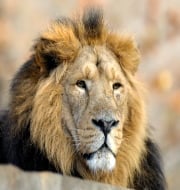 Rajasthan’s first lion safari was inaugurated at Nahargarh Biological Park. The park is located on Delhi-Jaipur National Highway in the Aravalli foothills, nearly 12 kilometers from state capital Jaipur (known as Pink City). It will be open for visitors from October 2018.

The lion safari project is located at biological park spread across 38 hectare. The park was inaugurated by Rajasthan Chief Minister Vasundhara Raje in June 2016. Lions in this park were brought from Junagarh, Gujarat under an exchange programme. Total of 10 lions will be released in the park in a phased manner. The park will serve for breeding lions and also centre of attraction for tourists. It will provide new habitat to lions and also add tourism venue to the Pink City.  Visitors will be able to see lions in their natural habitat in the park in enclosed by a fence. They will be taken on a nearly 4 kilometer safari in closed bus. Apart from lion, the park also hosts wolves, jackals, and hyenas.