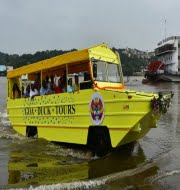 Punjab Government has launched country’s first amphibious bus project at the Harike wetland near Amritsar.
The amphibious bus named as “Harike Cruise” travels on land and as well as in water. It was launched by Deputy Chief Minister Sukhbir Singh Badal.

Harike Wetland (also known as Hari-ke-Pattan) is largest wetland in northern India. It borders of Tarn Taran Sahib and Ferozepur district of Punjab. The wetland and the Harike lake were formed by constructing the headworks (dams) across the confluence of the Beas and Sutlej rivers in 1953. It supports rich biodiversity which plays a vital role in maintaining the precious hydrological balance in the catchment area. It was designated Ramsar Wetlands of International Importance in March 1990. It has provides ecological support to migratory fauna and number of globally threatened species such as Indus dolphins and Gharials.

Punjab had revoked/withdrawn the general consent to the Central Bureau of Investigation (CBI). From ...

Amarinder Singh, Chief Minister of Punjab has virtually launched the phase-II of Rs. 11,000 crore Ur...

The Punjab government has decided to start distribution of smartphones to students free of cost, on ...