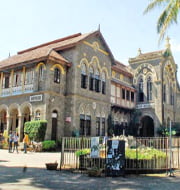 Pune’s prestigious Fergusson College, has been accorded the special heritage status by the University Grants Commission (UGC).
With the status, UGC will provide financial assistance for its upkeep. Now the college is among the 19 institutions in the country to get the heritage status.