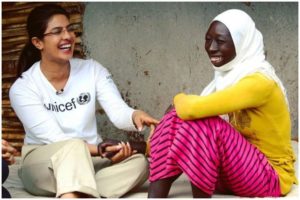 She is known for her contribution to social causes and for being a voice for children’s education. She is a UNICEF Goodwill Ambassador and most recently she visited Ethiopia as part of it. She also has been a part of United Nation’s global “Girl Up” Campaign. She is also associated with several NGOs in India to raise awareness about ways to improve the education, health and safety of girl child in India.

It is special program of UN devoted to aid national efforts to improve the health, nutrition, education, and general welfare of children. It was established in 1946 to provide relief to children in countries devastated by World War II. It is headquartered in New York City, United States. It was formerly known as United Nations International Children’s Emergency Fund.

Danny Kaye Humanitarian Award: It is named after actor-philanthropist Danny Kaye. He was an American actor, singer, dancer, comedian, musician, and philanthropist. He was UNICEF’s first Goodwill Ambassador in 1954.