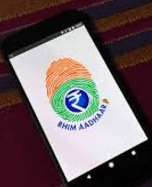 Prime Minister has launched BHIM-Aadhaar platform from Nagpur. BHIM-Aadhaar platform is the merchant interface of the BHIM App that has been launched for making digital payments using the Aadhaar platform. BHIM App was launched in December 2016 to provide a one-stop solution for all digital payments. The App created a new world record by registering 1.9 crore downloads within four months since its launch.
the newly launched BHIM-Aadhaar platform will help people to pay digitally using their biometric data like thumb imprint on a merchant’s biometric enabled device like a smart phone or a biometric reader. The App needs to be installed only by merchants and they need to connect their smartphones to the biometric scan machine to accept the payments from customers. The customers who want to pay using this app needs to link Aadhaar number and biometic fingerprint to complete a transaction.

Prime Minister has also launched two new offers rewarding BHIM users. Both the schemes will be administered by Ministry of Electronics and Information Technology (MeitY) and implemented by National Payments Corporation of India (NPCI).

Under this scheme, merchants will get cash back on every transaction using BHIM. The merchants can get cashback of up to Rs 300 per month, with each merchant eligible to win up to Rs 1800 in 6 months.