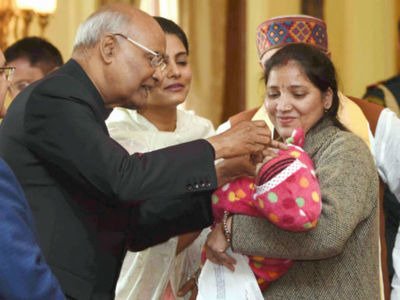 President Ram Nath Kovind has launched Pulse Polio Immunization (PPI) Programme for year 2018 by administering polio drops to children at the Rashtrapati Bhavan. The event was organised on the eve of the National Immunisation Day (NID), observed on 28 January. More than 17 crore children of less than 5 years across the country will be given polio drops as part of Government’s drive to eradicate polio from the country.

PPI Programme is massive immunization programme of Government to sustain polio eradication from the country. It was launched by Central Government in co-operation with international agencies, state governments and non-government/voluntary organizations in 1995 as result of World Health Organization’s (WHO) Global Polio Eradication Initiative.
PPI Programme was initiated with objective of achieving 100% coverage under OPV. It aims to reach unreached children through improved social mobilization, plan mop-up operations in areas where poliovirus has almost disappeared and maintain high level of morale among the public. Under this programme, all children under 5 years are given 2 doses of Oral Polio Vaccine (OPV) in month of December and January every year until polio is eradicated.

Polio (Poliomyelitis) is a highly infectious viral disease, which mainly affects young children below age of 5. It is transmitted from person-to-person. It mainly spreads through faecal-oral route (e.g. contaminated water or food). After entering body, it multiplies in the intestine, from where it can invade the nervous system and can cause paralysis. Its initial symptoms include fever, fatigue, headache, vomiting, stiffness in the neck, and pain in limbs. In some cases, it causes permanent paralysis. There is no cure for polio, it can only be prevented by immunization.