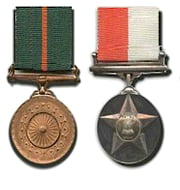 Pranab Mukherjee on 21 March 2015 conferred one Kirti Chakra awards and 11 Shaurya Chakra awards on armed forces personnel. Among these 11 awardees three were conferred posthumously for gallantry.
The awards were given to defence personnel for displaying conspicuous gallantry, indomitable courage and extreme devotion to duty at a Defence Investiture Ceremony held at the Rashtrapati Bhavan in New Delhi.