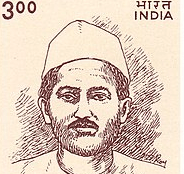 The Department of Post has issued a Commemorative Postage Stamp on Rajkumar Shukla in New Delhi on 18th December 2018. The stamp was released as a tribute to the contribution made by Rajkumar Shukla in the launch of Champaran Satyagraha in the year 1917.

The Department of Posts has been issuing postage stamps to honour and to pay a tribute to the important personalities who made a great contribution to public life especially the freedom fighters of India. The total number of such stamps released this year has reached 43 with the issuance of this postage stamp.