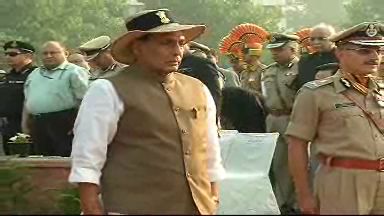 Police Commemoration Day was observed on 21 October.
Background:
At the Annual Conference of Inspectors General of Police of States and Union Territories held in January 1960, it was decided that October 21 would be observed as ‘Commemoration Day’ in all Police Lines across India to mark the memory of police personnel who were killed in Ladakh in a faceoff with the Chinese Army and all the other Police personnel who have been killed on duty elsewhere.
The faceoff took place at Hot Springs in North Eastern Ladakh. A memorial has been erected at Hot Springs and, every year, Police personnel from across India trek to Hot Springs to pay their respects.
Since the year 2012, the Police Commemoration Day Parade is being held at the National level at the Police Memorial, Chanakyapuri.
Loss of lives
Since 1961, 32,557 police personnel have lost their lives in service of the nation and society. Between September 2013 and August 2014, 662 police personnel throughout the country have lost their lives in the line of duty.  (image source: ANI)