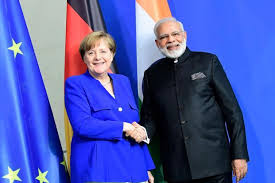 German Chancellor Angela Merkel is to visit India on November 1, 2019 for the fifth biennial Inter Governmental Consultations. She will meet PM Modi during her visit. The leaders will have separate engagement with the CEOs and business nations of both nations. The countries will discuss deepening of cooperation in traditional sectors like skill development, energy and transport