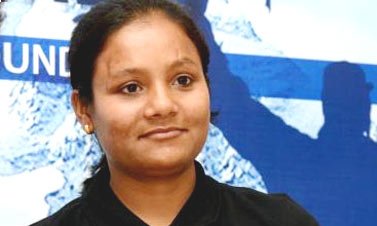 Prime Minister, Narendra Modi, launched Arunima Sinha’s book Born Again on the Mountain in New Delhi. Arunima Sinha is the first female amputee and first Indian amputee to climb Mount Everest.
Arunima Sinha’s Everest expedition struggle
In 2009, Arunima was pushed out of a running train by thieves while resisting them. In this accident, one of her legs was amputated below the knee. Prior to this accident she was a national-level volleyball player but this accident cost her sporting career.
During her treatment after the train accident she had resolved to climb Mount Everest after getting inspired from cricketer Yuvraj Singh’s successful fight against cancer.
In 2012, she excelled in the basic mountaineering course with a prosthetic leg from the Nehru Institute of Mountaineering, Uttarkashi.
Finally in April 2013, she successfully climbed on Mount Everest, thus becoming first female amputee and first Indian amputee to climb the peak.