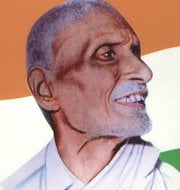 He was born on August 2, 1876 in Krishna district of Andhra Pradesh and died in 1963. He was firm believer in Gandhian principles and ardent nationalist. He was also linguist, geolist and writer. At young age, he had served as soldier in British India Army in South Africa during Anglo Boer war in Africa. During his stint with British Army he had met Mahatama Gandhi in Africa. He was 19 when meeting took place and formed association Gandhiji which would last for more than 50 years.
After his return from Africa, he had most of his time researching about farming and cultivating cotton. He even went on to study Sanskrit, Urdu and Japanese Anglo Vedic School in Lahore. Such credentials also had given him interesting titles like ‘Japan Venkayya’, ‘Patti (cotton) Venkayya’ and ‘Jhanda Venkayya’.

Venkayya had published book in 1916 offering thirty designs of what could make Indian flag. Throughout all Congress sessions between 1918 and 1921, he relentlessly put forward idea of having flag of our own in every session of the Congress. Back then, he was working as lecturer in Andhra National College in Machilipatnam.
He met Gandhiji once again in Vijayawada and showed him his publication with various designs of flag. Acknowledging need for national flag, Gandhiji then asked Venkayya to design fresh one at national congress meeting in 1921. Initially, he came up with saffron and green colours, but it later evolved with spinning wheel at centre (representation wheel of dharma and law) and third colour-white. This modified flag design was approved Gandhiji and later officially adopted by Indian National Congress in 1931.

India’s National Flag (tricolor or तिरंगा) is based on Swaraj flag of Indian National Congress designed by Pingali Venkayya. It was adopted during by Constituent Assembly on the 22 July 1947, a few days before India’s independence from the British. The national flag is horizontal rectangular tricolour of India saffron, white and India green, with Ashoka Chakra (24-spoke wheel) in navy blue at its centre. Usage of national flag is governed by Flag Code of India and other laws relating to the national emblems. The flag code also governs protocol of flying flag and its use in conjunction with other national and non-national flags.