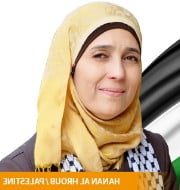 Palestinian teacher Hanan Al Hroub from a refugee camp has been awarded prestigious one million dollar 2016 Global Teacher Prize.
She was presented with the award at a ceremony held in Dubai for her outstanding contribution to the profession.
She beat nine other finalists to bag the award including India’s Robin Chaurasiya, who runs a not-for-profit school in Mumbai for girls from the city’s red light district of Kamatipura.