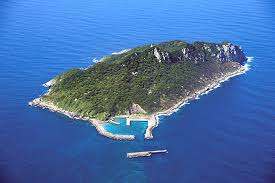 Okinoshima Island, Japan’s men-only island was declared as a UNESCO world heritage site. The island will be the 17th set of Japanese cultural assets to be granted this status and overall 21st in the list.
The island is part of the prefecture’s Munakata region. It is located in south-west Japan between the main island of Kyushu and the Korean Peninsula in the Sea of Japan (East Sea). It still follow strict taboos from ancient times, including the controversial ban on women from entering the island

Okinoshima Island is an ancient religious site in Japan that is considered sacred by the local Munakata Taisha. Entries of women are strictly banned on the island. Even male visitors need to take off their clothes and take a naked bath (purifying bath) before visiting the shrine.
It is permanently manned by a Shinto priest who prays the island’s goddess, in a tradition that has been kept up for centuries. The entire island is considered a Shinto Kami, an ethnic religion of Japan that focuses on ritual practices to be carried out diligently, to establish a connection between present-day Japan and its ancient past. Kami are the spirits or phenomena that are worshipped in the religion of Shinto.
The island covers an area of 240 acres and has a maximum elevation of 244 m. Since ancient times, it was an important window for foreign trade in Japan, forming part of a trade route that linked the archipelago to the Korean peninsula and China.