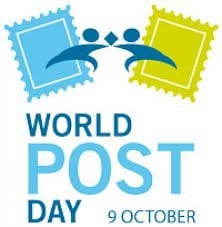 The United Nations is the only organization in the world which is neither a country nor a territory to issue postal stamps. The first UN Stamps were issued in 1951.

The India Post that runs the postal system in India was found by Lord Clive in 1766 It works under Ministry of Communication. It is one of the widely distributed networks in the world. India Post is divided into 23 postal circles headed by Chief Post Master.

The India Posts delivers life insurance covers under Postal Life Insurance and Rural Postal Life Insurance. It provides retail services such as sale of forms and bill collection. It also acts as an agent for GoI in discharging services such as wage disbursement and old age pension payments under schemes such as Mahatma Gandhi National Rural Employment Guarantee Scheme. Today this has been under taken by the India Post Payment Banks.

India is a member of the union since 1876. It is a specialised agency of United Nations. It coordinates postal policies among member countries. The headquarters of Universal Postal Union is located in Bern, Switzerland. It was established under Treaty of Bern and was earlier known as General Postal Union. French was the sole official language of the union till 1994. English was added after 1994.