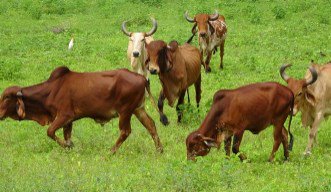 Every year, the World Day for Farmed Animals is celebrated by the International Animal Welfare Organization, Asia for Animals Coalition and World Animal Protection. The day is celebrated to bring in awareness in treating animals as sentient beings and make visible the urgency and importance of farm animal welfare.

India joined the other Asian countries to celebrate the day under Asia for Animals Coalition grouping. Asia for Animals consists of 23 animal welfare organizations that are focused on improving welfare of animals in Asia.

The day is celebrated on the birth anniversary of Mahatma Gandhiji as he was an animal lover. It is organised by FARM (Farm Animal Rights Movement) since 1983.

Poor treatment of farm animals and intensive animal farming pose pandemic level threat to humans. It also depletes the health of animals. The diseases such as bird flu, swine flu and Nipah virus emerged from farm animals. Therefore, it essential to treat farm animals with utmost care and keep them clean and healthy.

Around 40 billion chickens are severely affected due to intensive farming models globally. On the other hand, more than 50 million dairy animals are farmed for milk in substandard conditions. The day creates awareness about the drawbacks of such treatment.

Every year 65 billion animals are killed to produce meat, diary and eggs. Most of these animals are confined and mutilated to grow large in a short period of time.

The Livestock Census in India is conducted once every five years since 1919-20. The Ministry of Fisheries, Animal Husbandry and Dairying conducts the census. It covers all the domesticated animals. So far 19 such censuses have been conducted in India. The Key Findings of the 20th Livestock Census released in November 2019 are as follows

The Department of Animal Husbandry and Dairying operating under the Ministry of Fisheries, Animal Hu...

The World Health Organization is to celebrate Antimicrobial Awareness Week between November 18, 2020...

The Union Territory of Ladakh and National Dairy Development Board signed a Memorandum of Understand...

Effect of COVID-19 on Livestock

A recent study found that the SARS CoV 2 did not affect many of the livestock animals including dogs...

On March 14, 2020, the Kerala Government ordered poultry culling. Parappanagadi has been identified ...