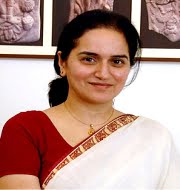 History writer Nayanjot Lahiri has won the prestigious 2016 John F. Richards Prize for her book Ashoka in Ancient India.
The prestigious prize will be bestowed upon her at the American Historical Association (AHA’s) 131st Annual Meeting to be held in Denver, Colorado in January 2017.
Her book Ashoka in Ancient India has been critically acclaimed for its riveting account of an emperor Ashoka. She had deftly adjudicated between textual, archaeological, and geographical evidences to offer a dazzling interpretation of Ashoka and the ancient world.