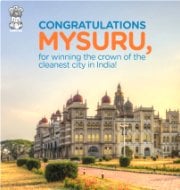 Mysuru city from Karnataka has been ranked first in terms of cleanliness for second time in row among the 73 surveyed cities in Swachh Sarvekshan 2016.
It was announced by Urban Development Minister Venkaiah Naidu during the Swachh Survekshan 2016 award function held in New Delhi.
Key facts

Background
The first Swachh Survekshan Survey was undertaken by Union Urban Development ministry in 2014 in 476 cities and municipalities which have a population of over 1, 00,000. Under the Swachh Bharat Mission, the government has set a target of constructing over one crore individual household toilets and over 2.5 lakh community toilet seats by 2nd October, 2019.