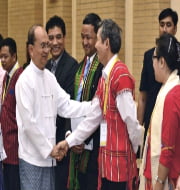 Myanmar government has signed a peace accord with eight of the 15 ethnic armed minorities groups especially belonging to Kayin and Chin groups to end decades of civil war.
The ceremony was held by President Thein Sein in Naypyidaw in the presence of six international witnesses including India, China, Japan, Thailand, UN and European Union (EU).
The agreement will remain open for the signature from the other armed groups with which the government of Myanmar is being involved in negotiations.
Indian delegation was represented by National Security Advisor (NSA) Ajit Doval along with PM’s special envoy for northeast R N Ravi and former Mizoram chief minister Zoramthanga.
The peace deal is considered as the fruit of more than two years of negotiations between Myanmar’s junta government and rebels as part of key reforms undertaken President Thein Sein ahead of November 2015 general elections.
Background