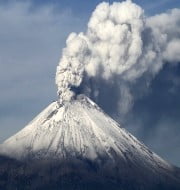 About the Pacific Ring of Fire
The Ring of Fire is a major area in the Pacific Ocean, approx 25000 miles, where about 75% of the world’s volcanoes are located. The Ring-of-Fire is also called as the Circum-Pacific Belt. Many major and minor tectonic plates such as the Eurasian, North American, Juan de Fuca, Cocos, Caribbean, Nazca, Antarctic, Indian, Australian, Philippine, and other smaller plates meet at the Ring of Fire. The movement of these tectonic plates leads to volcanic eruptions, earthquakes and formation of deep trenches in the ocean. The Mariana trench which is the deepest ocean trench is also located in the Ring-of-Fire.