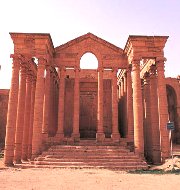 Islamic State (IS) militants have destroyed the ruins at the ancient city of Hatra located in south-west of Mosul in Northern Iraq.
City of Hatra, a UNESCO World Heritage Site was founded 2,000 years ago, in the days of the Parthian Empire.
It is home to numerous temples and sculptures dedicated to gods including Apollo and Poseidon. It is also famous for its striking pillared temple which blends Graeco-Roman and eastern architecture.
Earlier, IS militants had bulldozed the ancient city of Nimrud, an Assyrian city founded in the 13th Century BC.
It should be noted that, the destruction of ancient cities comes in the city of Mosul, Iraq’s second-largest city which is in control of IS since June 2014 including nearby areas. This region has nearly 1,800 of the Iraq’s 12,000 registered archaeological sites.
IS militants are destroying these heritage Islamic Arab cities as part of its extremists propaganda.