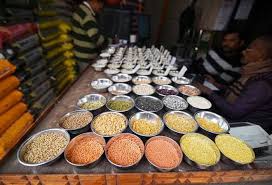 The central government has launched the “Mera Ration Mobile App” in the country on March 12, 2021. This app was launched in order to facilitate the ‘One Nation-One Ration Card’ system.

The app was developed by the government in association with the National Informatics Centre (NIC). It was developed in order to facilitate several “one nation-one ration card” system related services among the National Food Security Act (NFSA) beneficiaries. It will facilitate several services to migrant beneficiaries, FPS dealers and other relevant stakeholders. The app will also help in identifying nearest fair price shop. It will benefit those ration card holders who will move to new areas for livelihoods. Mobile application will be launched in 14 languages. Currently it is available in English and Hindi. The languages are identified on the basis of places where most migrant people move. With the help of the app the beneficiaries can easily check details of food grain entitlement, recent transactions and Status of their Aadhaar seeding. The migrant beneficiaries can also register their migration details with the help of application. Beneficiaries can also enter their suggestions or feedback.

The One Nation-One Ration Card system ensures the availability of ration to the beneficiaries in accordance with the National Food Security Act (NFSA) and other welfare schemes. It benefits especially the migrant workers and their families. The benefits under the system can be availed at any fair price shop (FPS) across the nation. This system was started initially in 4 States in August 2019. It has now been rolled in 32 States and UTs by December 2020. However, integration of remaining 4 States and UT namely Assam, Chhattisgarh, Delhi and West Bengal will be completed soon.  The system covers around 69 crores NFSA beneficiaries which accounts for 86 % of the NFSA Population.