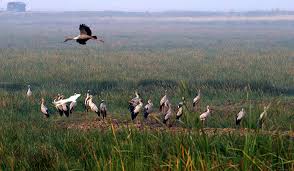 Mangalajodi Ecotourism Trust in Odisha has won prestigious United Nations World Tourism Organisation (UNWTO) Award for Innovation in Tourism Enterprise at 14th UNWTO Awards ceremony held in Madrid, Spain.
The award was given in recognition of Mangalajodi’s business model that is both economically viable and environmentally sustainable based on principles of community ownership and Eco Tourism.

Mangalajodi Ecotourism Trust is community owned and managed venture promoted by RBS Foundation India and Indian Grameen Services on banks of Chilika Lake in Odisha
The villagers of Mangalajodi were once associated with poaching of birds near Chilika Lake but now they stand as true defenders of wildlife in the region. The change was mainly due to a coordinated effort in implementing an awareness campaign on importance of preserving natural species and benefits associated with wildlife tourism.
The change has soared numbers of birds from 2000 (during peak unsustainable hunting) to over three lakh in the region. Moreover other visible impacts this change has resulted in increasing revenue through ecotourism, sharp fall in poaching incidents and increasing support of villagers.

Chilika Lake
Chilika Lake is largest coastal lagoon or brackish water lake in India and Asia and second largest lagoon in the world. It is located at mouth of Daya River, flowing into Bay of Bengal. It spread over Puri, Khurda and Ganjam districts of Odisha state on east coast of India, covering an area of over 1,100 km2
It is largest wintering ground for migratory waterfowl found anywhere on Indian sub-continent. It is one of hotspot of biodiversity in country and some rare, vulnerable and endangered species listed in IUCN Red List of threatened Animals. It was designated as the first “Ramsar Site” of India on account of its rich bio-diversity and ecological significance.

UNWTO is United Nations agency responsible for promotion of responsible, sustainable and universally accessible tourism. It is leading international organization in field of tourism. It promotes tourism as driver of economic growth, inclusive development and environmental sustainability. It offers leadership and support to sector in advancing knowledge and tourism policies worldwide.  It is headquartered in Madrid, Spain. Its membership includes 156 countries, 6 territories and over 500 affiliate members