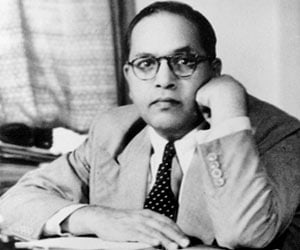 President Pranab Mukherjee led the nation in paying homage to architect of the Indian Constitution, Dr. B R Ambedkar, on his 59th death anniversary which is observed as ‘Mahaparinirvan Din’.
Vice President Hamid Ansari, Prime Minister Narendra Modi, former Prime Minister Dr Manmohan Singh also offered tributes to the Dr Ambedkar.
The function began with a prayer by Buddhist monks. The programme was organised by the Ambedkar Foundation, an autonomous organisation under the Ministry of Social Justice and Empowerment.
Many functions are being organised across the country to mark the day. In Maharashtra, rich tributes were paid to Dr Babasaheb Ambedkar by thousands of followers from all over the state who converged at his memorial ‘Chaityabhoomi’ near Shivaji Park in Dadar, Mumbai.