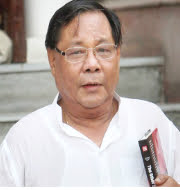 Former Lok Sabha Speaker Purno Agitok Sangma passed away after suffering a heart attack in New Delhi. He was 68.
Sangma was a 9 time member of Lok Sabha and the Speaker in the 11th Lok Sabha from 1996 to 1998. He had played significant role in the development of the North East.