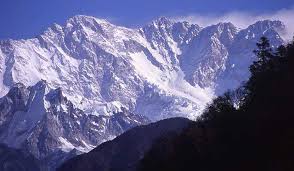 Khangchendzonga Biosphere Reserve in Himalayan state of Sikkim was included in UNESCO designated World Network of Biosphere Reserves (WNBR), making it 11th Biosphere Reserve from India to achieve this recognition. The decision was taken at 30th Session of International Coordinating Council (ICC) of Man and Biosphere (MAB) Programme of UNESCO held in Palembang, Indonesia.

It is one of the highest ecosystems in the world, reaching elevations of 1, 220 metres above sea-level. It includes range of ecolines, varying from sub-tropic to Arctic (tundra), as well as natural forests in different biomes, that support an immensely rich diversity of forest types and habitats.
Its core area is major transboundary Wildlife Protected Area. Its southern and central landscape which makes up 86% of core area is situated in Greater Himalayas. Its northern part of accounting for 14% of area is characterized by trans-Himalayan features.
The core zone of Khangchendzonga National Park already has been designated World Heritage Site in 2016 under ‘mixed’ category (first from India in this category). Many of mountains, peaks, lakes, caves, rocks, Stupas (shrines) and hot springs in this biosphere reserve function as pilgrimage sites.
The core zone of this biosphere reserve alone has over 150 glaciers and 73 glacial lakes, the prominent is famous 26-km-long Zemu glacier. It is also home to number of globally threatened fauna including musk deer, snow leopard, red panda and Himalayan Tahr and many ethnic communities including Lepcha, Bhutia and Nepalese.
Over 118 species of large number of medicinal plants are found in Dzongu Valley of this reserve which are of ethno-medical utility. The transition zone of reserve is targeted for eco-development activities, afforestation, plantation of medicinal herbs and soil conservation measures.

Biosphere reserves are areas of terrestrial and coastal ecosystems which promote conservation of biodiversity with its sustainable use. They serve in some ways as ‘living laboratories’ for testing out and demonstrating integrated management of land, water and biodiversity. They are internationally recognized within framework of UNESCO’s Man and Biosphere (MAB) programme and nominated by national governments. There is World Network of Biosphere Reserves (WNBR) under MAB Programme. Within this network, exchanges of information, experience and personnel are facilitated. There are over 500 biosphere reserves in over 100 countries. India has total 18 Biosphere Reserves and with inclusion of Khangchendzonga number of internationally designated WNBR has become 11 and remaining 7 Biosphere Reserves are domestic Biosphere Reserves.
Man & Biosphere Programme
UNESCO’s Man and the Biosphere (MAB) Programme was launched in 1971 with aim of promoting interdisciplinary research, training, and communications in field of ecosystem conservation and rational use of natural resources. The programme is suited to respond to results of the 1992 United Nations Conference on Environment and Development (UNCED) and especially the objectives of the Convention on Biological Diversity.
Selection of Biosphere Reserves
Primary Criteria: Site must contain effectively protected and minimally disturbed core area of value of nature conservation. It should also include additional land and water suitable for research and demonstration of sustainable methods of research and management. Its core area should be typical of biogeographical unit and large enough to sustain viable populations representing all trophic levels in the ecosystem.
Secondary Criteria: Areas having rare and endangered species, Areas having diversity of soil and micro-climatic conditions and indigenous varieties of biota, Areas potential for preservation of traditional tribal or rural modes of living for harmonious use of environment.