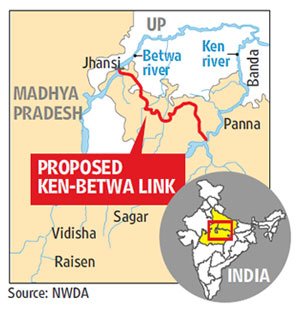 The Congress leader, Jairam Ramesh, has expressed his fear regarding the interlinking the Ken-Betwa rivers linking project. The minister said that the interlinking of the rivers will destroy the Panna Tiger Reserve located in the state of Madhya Pradesh.

The minister also said that, he had suggested alternatives of the river interlinking 10 years ago but those recommendations were ignored.

The River interlinking project aims to divert the surplus water from Ken river in Madhya Pradesh to Betwa river in Uttar Pradesh. This is being done with the objective of irrigating the drought-prone Bundelkhand region across the districts of Jhansi, Lalitpur, Banda & Mahoba districts in UP and Tikamgarh, Chhatarpur & Panna districts in MP. This project is one among the 30 rivers interlinking projects across the country.

What is the need for Interlinking?

India receives 80% of the water through annual rains while the surface water flow happens for a period of 4 month from June to September. Thus, there exits the spatial & time variance & demand-supply gaps in the availability of natural water and the demand for irrigation, industrial water & drinking water. This gap can be balanced by interlinking the rivers wherein the rivers will be joined by the network of canals & reservoirs.

River linking will help in curbing the recurring droughts and reducing the excessive dependence on groundwater in the Bundelkhand region. It will thus help in reducing the rate of suicides among farmers by ensuring them a stable livelihood. It will produce 75 MW of electricity along with provide drinking water to 13 lakh people in the two states.

Construction of Daudhan dam will submerge 10% of the critical tiger habitat of Panna Tiger Reserve. This in turn would affect the tiger conservation efforts. The height of the dam will have effect on the nesting sites of the vultures.