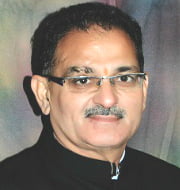 Kavinder Gupta on 18 March 2015 was unanimously elected as Speaker of the 12th Assembly of Jammu and Kashmir (J&K).
The motion to elect the speaker of assembly was moved by State Minister for Law, Justice and Parliamentary Affairs Basharat Bukari and seconded by Deputy Chief Minister Nirmal Kumar Singh.
Gupta was elected with voice vote as there was no one from the Opposition going against the motion. He will replace the Protem Speaker Muhammad Shafi of National Conference.
Kavinder Gupta is Bharatiya Janata Party (BJP) legislator from Gandhinagar constituency in Jammu district.  He is the first time MLA to state assembly.
In December 2014, state assembly election Gupta had defeated senior Congress leader Raman Bhalla. Earlier he also had served as Mayor of Jammu city.