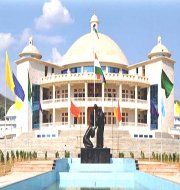 Justice Ramalingam Sudhakar was sworn in as fifth Chief Justice of High Court of Manipur after was appointed by the President Ram Nath Kovind. He was administered the oath of office by Governor Prof Jagdish Mukhi as per Article 219 of Constitution.

Justice Sudhakar hails from Panapakkam village in Vellore district. He graduated with Bachelors’ Degree in Life Sciences from Loyola College and obtained law degree from Madras Law College. He was enrolled as advocate in 1983 and started practice as associate of legal luminary and senior advocate Habibullah Badsha, former Advocate General of Tamil Nadu and Public Prosecutor of Madras High Court.
He was appointed as judge of Madras High Court in 2005 and as judge of High Court of Jammu and Kashmir in 2016.  In 2018, he was appointed as acting Chief Justice of High Court of J&K.