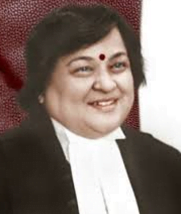 Justice Gita Mittal, the senior-most judge of Delhi High Court, has been appointed as the acting Chief justice of Delhi High Court with effect from April 14. Her appointment comes at the backdrop of the retirement of current Chief justice Gorla Rohini.
President of India has appointed Justice Mittal as the Chief Justice by exercising his powers conferred by article 223 of the Constitution of India.

Article 223 of the Indian Constitution provides for the appointment of acting Chief Justice by the President of India whenever the office of the Chief Justice of a High Court falls vacant due to any reason such as absence or otherwise.

In 2004, Justice Mittal was appointed as Additional Judge of Delhi High Court and was made permanent in 2006. Justice Mittal is one of the members of the Governing Council of the National Law University and Indian Law Institute. She has also been nominated to the Administrative Committee of the Indian Law Institute.
Justice Mittal is currently chairing the Delhi High Court committees on Mediation and Conciliation Centre and also over the committee monitoring the implementation of Judicial Guidelines for Dealing with cases of Sexual Offences and Child Witnesses. Justice Mittal spearheaded the inauguration of Vulnerable Witness Court Project in trial courts in Delhi. First such court room in the country was inaugurated in September 2012 and the second on September 2013.
Her important judicial pronouncements include pronouncements on compensation for riot victims, right to shelter of internally displaced persons, right to marriage of a female member of the Armed Force, principles governing DNA testing in paternity issues in the absence of statutory provisions, right to workers in labour force etc.